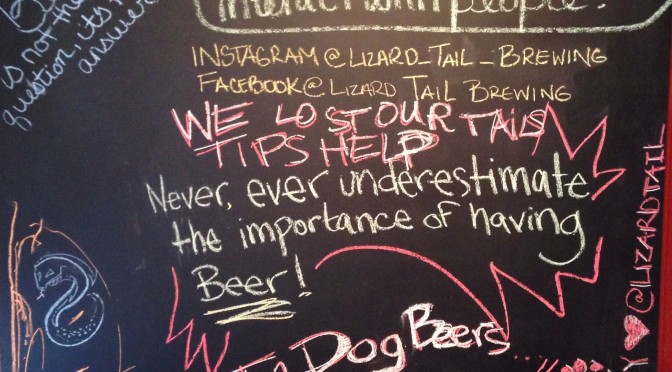 The third time is a charm, or at least that’s the hope for Lizard Tail, one of Albuquerque’s newest brewery arrivals. I recently stumbled into the former residence of both Bad Ass and Farside Brewing to be check out the new home of Lizard Tail. Though they weren’t scheduled to officially open until Friday, August 22, I took a chance with their soft opening earlier in the week and gave their wares a proper sampling.

It is about time that the Heights got a brewer; it has been needing one for a while. It is just a bit odd that all three that I’m aware of have taken up the exact same residence in a little strip mall at the corner of Montgomery & Eubank (which also happens to host the offices of everyone’s favorite crooked lawyer friend Saul, from “Breaking Bad.”) With a bit of luck, and some proper patronage, hopefully they’ll be around for a while.

The first thing I noticed once I walked in the door was — gone are the days of looking into the nano-brew kitchen when the place was Bad Ass and Farside. A wall has been erected, and a lizard has been painted. A whole lizard, not just the tail. Further inspection proved that they pretty much gutted the old place, adding and fine-tuning where appropriate.

The master brewers / prioritizers Dan and Ken seem to be heading into the direction of malt forward beers. A trend that is at times counter to the New Mexican love of hops and bitters. But this is something I’m not the least bit sad about. I like my beers with a good malty introduction, so it is just fine by me if they want to keep their two barrel system pumping out sweet low-hop beers. Expect beers to max out around 70 IBUs with most things circling around 30 to 40 IBUs.

As per typical, I ordered a flight of beers… two, actually. Each flight has 4 beers, and there were 7 on tap, with an 8th one showing up mid-way through flight number two.

It would be at this point where most beer bloggers would show you a picture of the flights of crisp clean, mouthwatering beers. But I’m not here to pander to an audience, nor am I your typical beer blogger. Also, I forgot to take a picture.

So instead, let’s go through a beer journey in our imagination. Close your eyes and you can visualize the beer as I describe it. Oh wait, don’t do that. I don’t want to judge you, but I’m pretty sure you can’t read with your eyes shut. So let’s just assume that the reverse is true, and 1000 words equals a picture.

The following were a part of the beer roster when I visited.

Outside of beer, Lizard Tail also offers up some appetizers and sandwiches. I only had the beer, so I’m afraid I can’t comment, but it seemed to be pretty typical fare for such an establishment.

I’ll be honest. I wasn’t overly impressed with Lizard Tail’s beer. That’s not to say that most of the beers weren’t good. Most were rather lovely, there just wasn’t anything that stood out in any major way, except for maybe the Rye Stout, but that may have simply been the novelty. Given Albuquerque’s brewery diversity, that’s something that really needs to happen.

I will say that Lizard Tail seems to have some great potential, a good location, and friendly staff. I will definitely be back, if for nothing else, for a pint of their Rye Stout and to give their seasonal beers a shot. 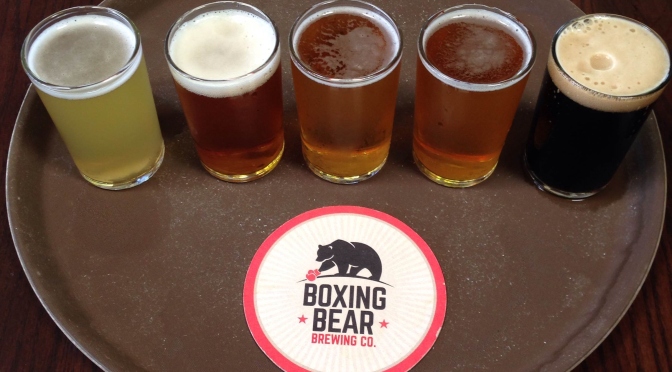 The Boxing Bear Brewing Co. is the latest brewery to open up on Albuquerque’s West side. Head brewer Justin Hamilton (former head brewer of Chama River) and his team opened the doors to the public on July 27, 2014. Since then, they’ve been slinging five of their own beers and a handful of local guest wares.

I recently swung by the new brewery on my way back from a morning trip to Santa Fe. You know, I was just up there piloting a plane for the first time, no big deal. With that humdrum out of the way, it was time for a second adventure.

Making my way to the intersection of Coors and Alameda, it was pretty easy to spot Boxing Bear. What took me by surprise, however, was the fact that there was a new Southwest Grape & Grain store next door. This is a name likely familiar to other local home brewers such as myself. Had I done my research beforehand, I would have known that our friendly new neighborhood brewery was in fact a collaboration. To me, this is a great sign. It means that not only is it convenient for a home brewer to grab a drink as they are picking up supplies, but also that Boxing Bear stands so strongly behind their beer that they almost dare you to try and make something better.

Something that may catch a few folks off guard is that the entrance to Boxing Bear is not under their great big sign. Rather, one has to stroll north around back and meander through Boxing Bear’s spacious patio picnic area (complete with a small stage). This probably wasn’t a bad move, and if I wasn’t there on a Friday afternoon I could easily imagine it filled with happy patrons and a live band. Once I finally breached the front door, I noticed the entry way. To my left was a grand 10 barrel brewing system, with room for more. I stood and admired the stainless steel and Pyrex, and had there been some brewing going on when I walked in, I may never have made it to the bar area. Mental note: come back and watch some professional brewers work their malty magic.

After finding a table, I ordered up a flight of all the house beers. The dining/bar area was quite large, made even larger in appearance by the wall-length mirror that I only noticed when I was getting a cup of water to cleanse my palate between samples. Apparently, the attractive man checking me out  when he too was getting water, was simply an illusion.

Time to settle in and meet the beers. From left to right on the flight I sampled the following. 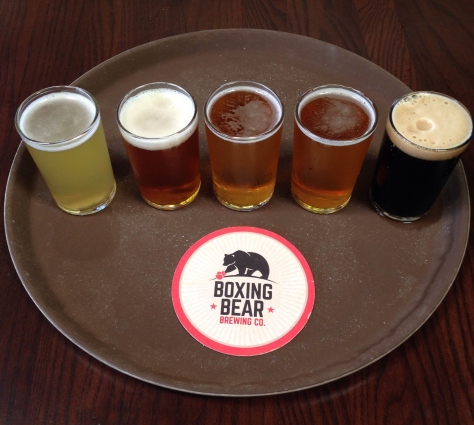 Though Boxing Bear only presently has five of their own beers on tap, I was told that an IPA and a Summer Ale were to be expected soon. They also expect to have a rotation of a few seasonals as time goes on. What’s interesting is that Boxing Bear also has their wine license. So we can expect wine, cider, and meads to be available. At the moment, they are also offering some guest beers from Bosque Brewing, Chama River, and Turtle Mountain, along with some wines from Black Mesa, Alta Canyon Cellars and Santa Fe Vineyards.

Beyond the standard booz-ohol, Boxing Bear also offers an array of reasonably priced sandwiches completed with pickle spear and a bag of kettle chips. They even have a vegetarian option. It would be nice to see them offer appetizers or other snack food as well. Hopefully that option is coming soon.

The staff of the brewery was very open and friendly. They were even willing to investigate further when they didn’t have answers to my questions. I don’t know if any of this was because I was madly scrawling notes into my pirate-themed spiral notebook as I was sampling beers.

This is absolutely a place I will return to.

Oh, and about the name Boxing Bear…  apparently Justin, the head brewer, has two dogs. One is a boxer, the other a great big fuzzy thing that looks like a bear.